COVID-19 LFTs shown to be less effective than thought

COVID-19 LFTs shown to be less effective than thought
16/03/2022
The number of Covid-19 infections missed by the Innova later flow test (LFT) is substantial enough to be of clinical importance.

As recently reported in the BMJ, the number of Covid-19 infections missed by the Innova later flow test (LFT) is substantial enough to be of clinical importance.

The authors of the study claim that LFTs are able to identify the vast majority of people who are infectious are likely overstated and run the risk of offering false reassurance to the people looking to rule out that they have the infection. This naturally has implications for government public health policy.

“Using an analysis linking six sources of empirical evidence, we have shown that the current Innova LFT is predicted to miss substantial proportions of infectious individuals.”

The study was conducted by Professor Jonathan Deeks and colleagues using empirical data from three UK test settings to highlight that earlier models underlying government policy overestimate the efficacy of LFTs, particularly in people with no symptoms. More than £7 billion have been spent by the UK on LTFs since mid-2020, but empirical evidence for the effectiveness of screening remains deficient.

The prevalent use of LFTs has been recommended mostly based on mathematical models, which make key assumptions about the viral loads required to transmit the virus and consequently the sensitivity needed for LFTs to detect an infection.

The new analysis on the other hand seeks to check these predictions using data from three real-world test settings: symptomatic testing at an NHS Test-and-Trace centre, mass testing of asymptomatic residents in Liverpool, and screening of asymptomatic students at the University of Birmingham with a linked data analysis used to identify the joint probability that people were infectious (with a positive viral culture or as a secondary case) but would test negative on Innova.

Estimates of the study for the number of positive cases missed by testing were much higher than those derived from the key mathematical models, which were previously used to inform policy decisions in the UK.

The study and mathematical model predictions on the percentage of positive cases that would be missed by Innova LFTs vary as follows: 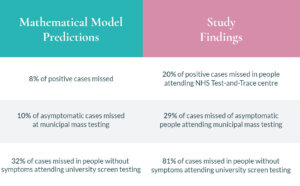 Professor Deeks and colleagues recognize that Lateral Flow Tests remain a critical tool in managing the COVID-19 pandemic – the tests are convenient, relatively inexpensive, and provide fast results which limit delays to self-isolation. However, they stress that “clinicians and policymakers must be aware of the limitations”.

The authors point out that until new generation Lateral Flow Tests that meet regulatory performance requirements are available, negative test results from LFTs are not reliable to rule out current infection.

Dr Angela Raffle and Dr Mike Gill, former regional director of public health, took it a step further in an opinion piece that accompanies the article stating: “The clear implication is that any positive impact from the detection of asymptomatic people may be outweighed by the effects of infectious people being falsely reassured and therefore mixing with others, perhaps even ignoring their symptoms.”

The percentage of positive cases that were missed differed between different settings because of a different distribution of viral load. The analysis revealed that people were most at risk of getting a false negative result via rapid antigen testing result when viral loads were lower. This is of significance because current UK recommendations encourage the use of Lateral Flow Tests as a screening tool in asymptomatic people, who by virtue of having no symptoms are likely to have lower viral loads even if infected.

In the opinion piece accompanying the analysis, Dr. Raffle and Dr. Gill point out: “Both the Innova (Biotime) test and the more recently issued Flowflex test are being used outside of their original manufacturers’ recommendations. Neither test has been thoroughly evaluated for self-testing or for use in asymptomatic people.”

In other comments for the press, Dr. Gill explained that the analysis of the new study confirms the real possibility that some of the rapid antigen tests in widespread use are not appropriate for some of their purposes of use. He further commented that the study findings should prompt a serious reassessment by the Medicines and Healthcare products Regulatory Agency (MHRA).

If it matters, have a PCR test, especially if you are planning on seeing a vulnerable or at-risk person or are attending a group gathering.

Dr Enam Abood is the founder of the Harley Street Health Centre Group. She has been practising medicine for 35 years and specialises in general and preventative ...

We get asked this question often when we see patients for their annual health screenings. Everyone wants to be sure that all the effort they make pays maximum dividends. After all, it isn’t easy to make time for exercise for many of us.
READ MORE
General Health 14/07/2022
General Health 31/05/2022

You have likely heard and seen news by now regarding an outbreak of a virus called Monkeypox virus (MPV). This guide covers symptoms, what we know about transmission so far and images to help you identify a Monkeypox rash.
READ MORE
General Health 31/05/2022
Need help?
Call us today to speak to our friendly team.
020 7323 1023 Harley Street Area, W1
020 3553 1798 City of London, EC3V

We use cookies on our website to give you the most relevant experience by remembering your preferences and repeat visits. By clicking “Accept All”, you consent to the use of ALL the cookies. However, you may visit "Cookie Settings" to provide a controlled consent.
Cookie SettingsAccept All
Manage consent

This website uses cookies to improve your experience while you navigate through the website. Out of these, the cookies that are categorized as necessary are stored on your browser as they are essential for the working of basic functionalities of the website. We also use third-party cookies that help us analyze and understand how you use this website. These cookies will be stored in your browser only with your consent. You also have the option to opt-out of these cookies. But opting out of some of these cookies may affect your browsing experience.
Necessary Always Enabled
Necessary cookies are absolutely essential for the website to function properly. These cookies ensure basic functionalities and security features of the website, anonymously.
Functional
Functional cookies help to perform certain functionalities like sharing the content of the website on social media platforms, collect feedbacks, and other third-party features.
Performance
Performance cookies are used to understand and analyze the key performance indexes of the website which helps in delivering a better user experience for the visitors.
Analytics
Analytical cookies are used to understand how visitors interact with the website. These cookies help provide information on metrics the number of visitors, bounce rate, traffic source, etc.
Advertisement
Advertisement cookies are used to provide visitors with relevant ads and marketing campaigns. These cookies track visitors across websites and collect information to provide customized ads.
Others
Other uncategorized cookies are those that are being analyzed and have not been classified into a category as yet.
SAVE & ACCEPT